It’s 9:39 am sharp in the buddhist year 2561 and the insanity officially begins. Shortly after, a bulk of howling Thais possessed by their magic Sak Yant tattoos run furiously towards the sacred shrine, bouncing into a human shield of chubby freelancers.

Once a year over 5’000 people come together at Wat Bang Phra, a large Buddhist temple in Nakorn Chaisri Basin some 50 kilometers away from Thailands capital Bangkok to celabrate the „Wai Khru Festival“ and to boost the magic of their sacred Sak Yant tattoos. Rumor says the ocult powers of these unearthly tattoos wears off over time. Reason enough for the owners to let it re-bless and recharge from their teachers every now and then. Therefore thousands of devoted buddhists flock to the popular temple of Wat Bang Phra in order to pay homage to their current or late tattoo master and to infuse new magic into their Sak Yants. Nevertheless, the background of „Wai Khru“ is influenced by the spread of India’s Brahmanism but became long time ago a comon ritual among all Thai, in which students pay respects to their teachers, expressing their gratitude and formalizing the relationship.

For some Sak Yant-pilgrims, the vodoo overcomes them. Sitting cross-legged under the glaring sun one after another enter a trance called „Khong Khuen“(magical force rising) and get possessed by their own tattoos. But just if the Yantra-wearers are mindful enough, they can turn into comon patterns like the crocodile, tiger, old man, or Hanuman the Hindu monkey king (and in my personal opinion also in Hulk and Zombies, although there isn’t a tattoo sketch for it yet). It usually starts with a yell or a deep moan, followed by distorted facial expressions. Those who get possessed by the „old man“ act as if they would go for a stroll with an invisible cane while laughing maniacally. As for Hanuman the monkey god suddenly bounces up screaming, racing full-speed towards the image of their former master Luang Phor Pern. Soon after the start my senses learned to be aware of those immediate mutations, since one of the monkey gods tripped and rolled over me on his way to the shrine. To stop the maniacs from reaching the sacred area, around two dozens of pseud-paramedics pull them out of the trance by hugging them back into the real world or simply rubbing their ears. This year, so I have been told from other observers, the craziness is just more massive than ever before. More moaning, more screaming, more possessions. Once they get into this excessive phase their eyes seem to stare through trivial things like other human beings, meanwhile their evil laughers and infernal screams contributes to the drama. Is it any wonder that some scenes reminded me on zombie movies like „Dawn of the Death“? Especially when the possessed creep on the ground, then looking up with twisted eyes, their jaws dropped and then start running careless in the direction of a bystander.

As the spectacle concludes, the monkhood leads some last prayers and get the hose ready for serious mass-splashing. Hence, all at once rush to the main stage to be blasted by holy water. Once cooled down the majority of devotees venture to the free food area or directly back home, their tattoos sufficiently re-charged with a magic spell. „To be honest, a Sak Yant won’t loose its power“, tells me a tattoo-artist later on. „What a show off, those poor fools still believe in whichcraft“, grumble other fellow buddhists living in Bangkok. When roaming the temple grounds after the main worship, the artists are already busy pleasing their customers. In the late afternoon, still dozens of people line up to get their skin inked. To receive a magic tattoo one has to purchase Marigold-flowers or even a pack of cigarettes as an offering for the monk and the mighty Buddha himself. These items are then given back to the small temple-stalls where they have been purchased, this is how the Wat makes some money aside for maintenance and to keep the temple-business alive. 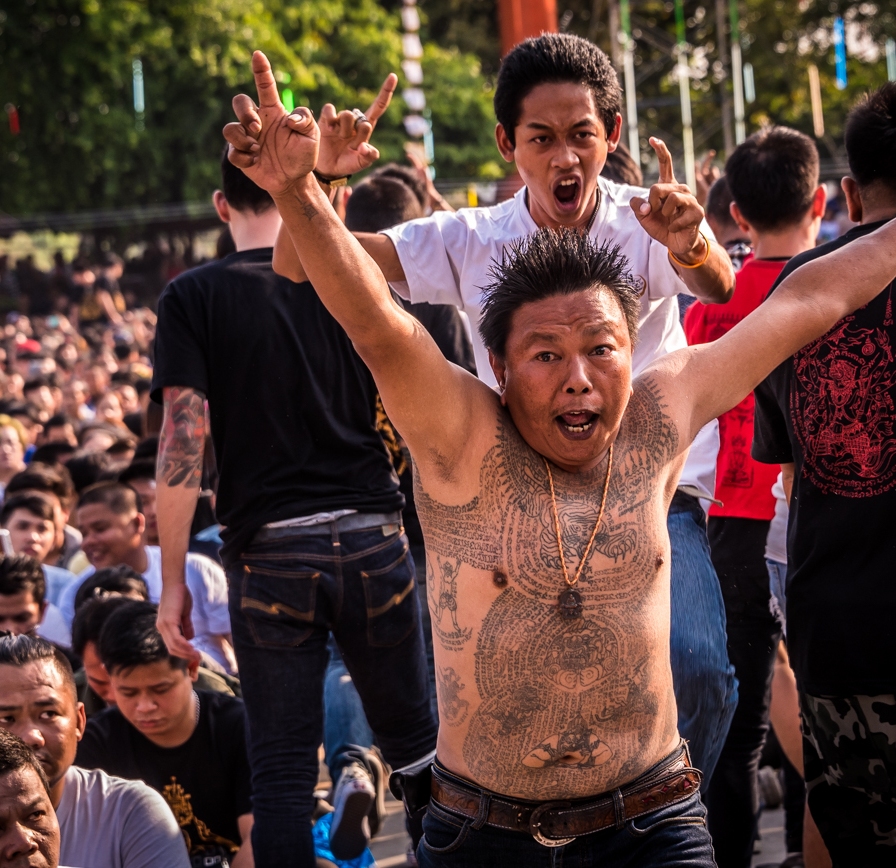 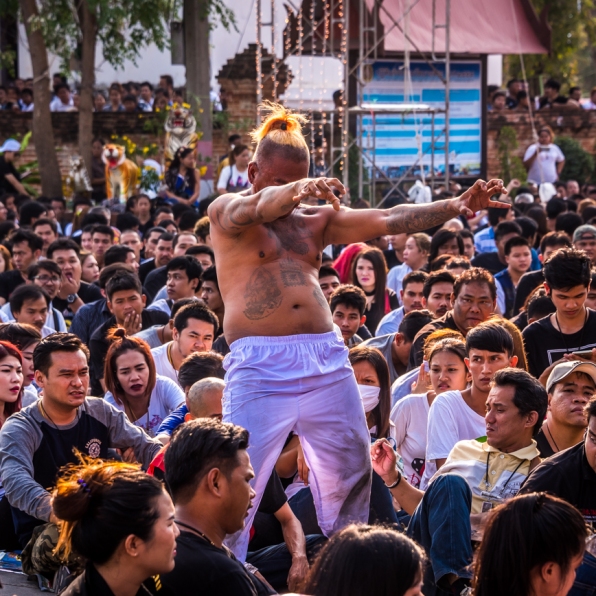 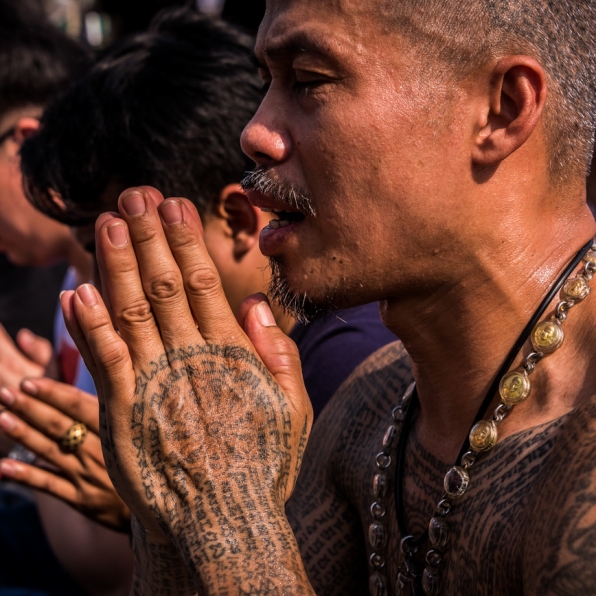 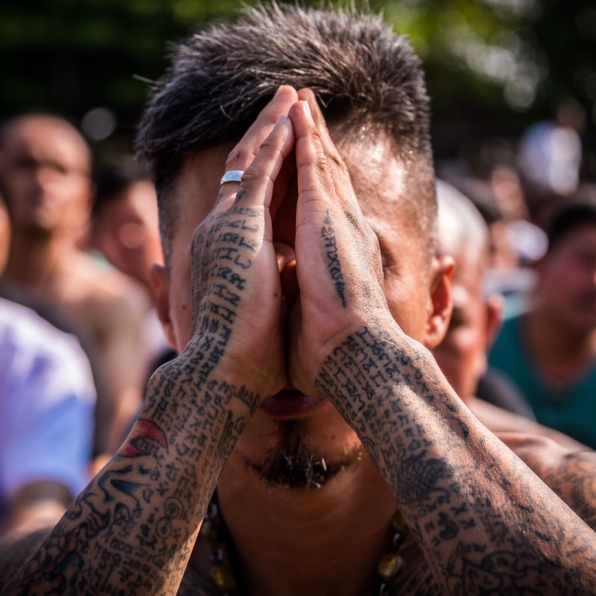 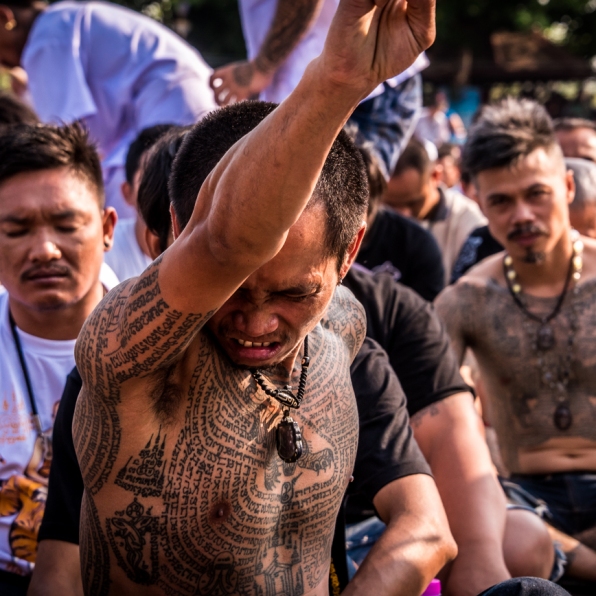 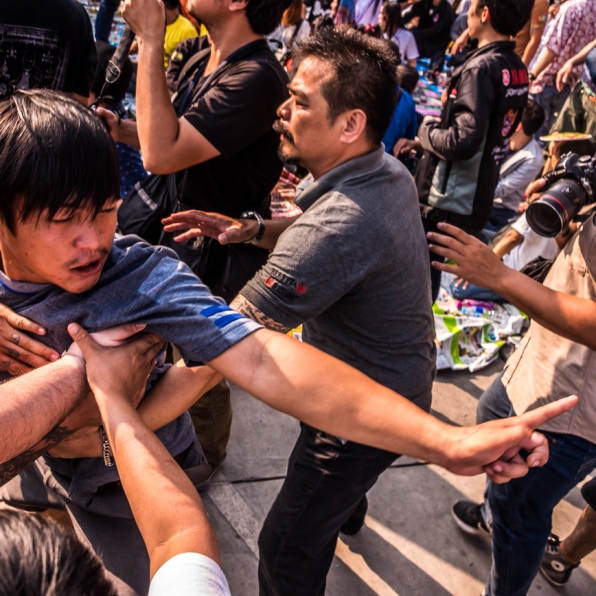 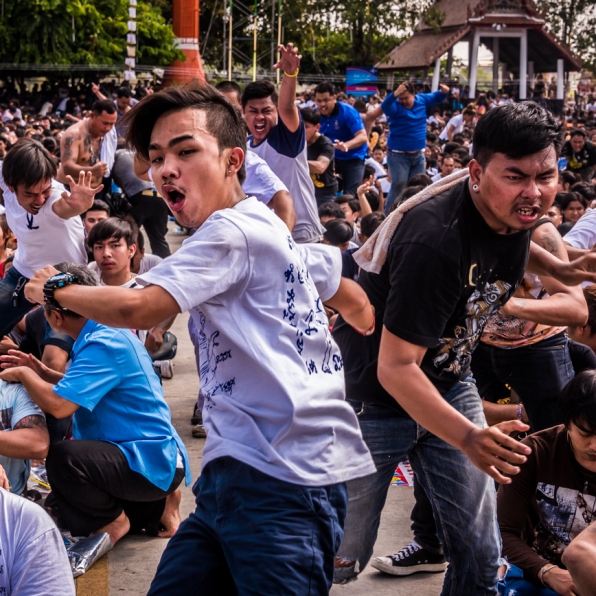 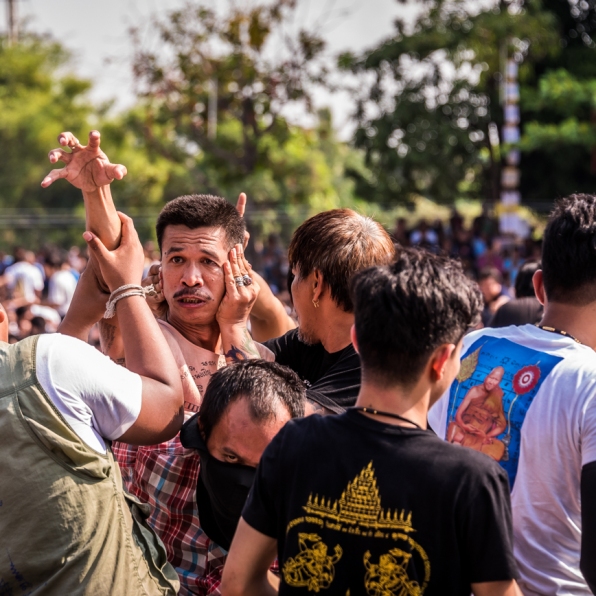 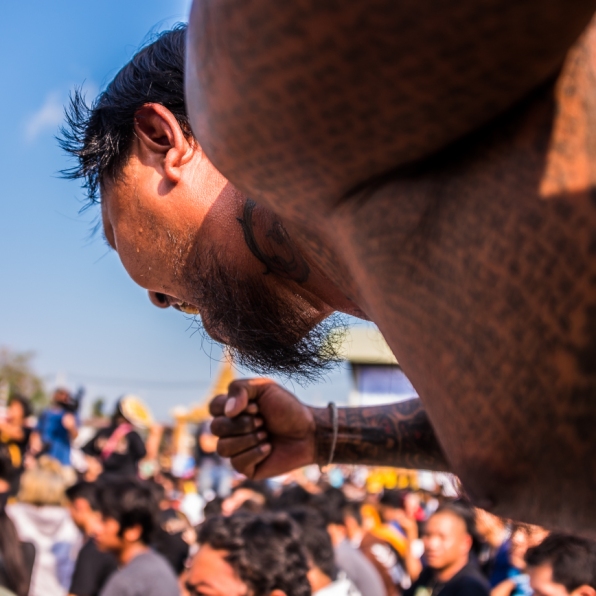 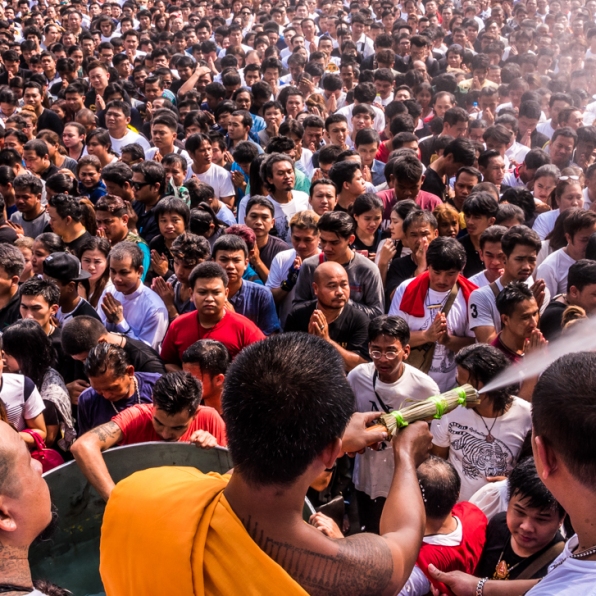 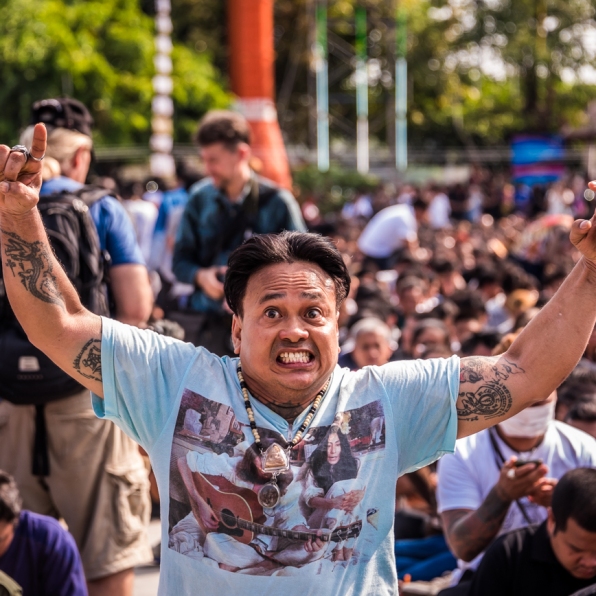 Coming back from a Thailand-trip with a sunburn, elaphant pants or a Sak Yant became comon sense over the years. However, the meaning behind the Yantras is quite fascinating and worth to know about, since so many are wearing those mystical diagrams. “Sak” refers to “tattoo,” and “Yant” means Yantra in Sanskrit, which refers litterally to a geometric design that is used for concentration and meditation. Its origin is found in Indian’s Brahmanism but nowadays draws also inspiration from buddhism. No one really knows when the tradition started but it is believed to be between one to two thousand years old. All the patterns will prevent its wearer from any kind of harm and possibly boost skills or luck – of course, just if one believes in it. These protective powers had already been helpful for believers on ancient battlefields, and nowadays wards off mischief and grants good fortune in martial arts, sports, politics, and even in gangster business. „But it won’t protect you from women“, jokes one tattoo artist when asking him about the myth.

Today the sacred tattoos are most alive in Thailand, but also in neighboring Cambodia, Laos, and Myanmar. Ever since movie stars like Angelina Jolie or Steven Seagal inked their bodies with magical Sak Yants, the cult started to spread globally and Wat Bang Phra gained more prevalence. Since several decades the monks living in the temple deliver sacred tattoos on a daily basis. „There is the average citizen visiting our Wat, but also Muay Thai fighters and politicians. And not seldom, foreigners seek to be tattooed if they currently face obstacles in life like a disease but also because they have faith in buddhism and the supernatural power of the Yantras“, tells me an elderly master. An other artist I’ve been questioning, had been a monk for many years but is now serving for the Thai-army as a lance corporal. He quoted that fellow servants are keen to get inked from him because they believe in the preventive powers against any kind of harm they might face in future troubleshootings.

Each devotee will receive a Sak Yant suitable to their profession or status. Particularly for most Thai peolpe it makes sense to follow the master’s advice, while foreigners more choose what they have in mind. Some I’ve talked to were eager to get the image of a crocodile (refers to thick skin) or the sign of a diamond armor (for health protection). If there is no specific request, the monk will start with the most comon and important Sak Yant – the „Kao Yot“ (9 Spires Yant). This pattern is usually placed at the top of the neck and will protect as well as bring good luck to its wearer. „Kao Yot” is the image every monk has to learn how to apply at first in his tattoo career. Although there is a countless number of pseud-Sak Yants on offer in Bangkok’s eerie alleys, a serious Sak Yant-master has to practice meditation and study the art of all Yantras for many years. „Experience and knowledge makes the difference“, tells me the completely tattooed guy who rolled over me earlier the morning. As many others he attends annualy for a new sign at Wat Bang Phra. When asking him, in which age he started having tattooes, he replied that he simply forgot. Therefore a good amount of people queue up for the more experienced monks.

Whilst the monks prick the spike of a arm-length metal needle into chests, shoulders and even bald heads they get assistance from devotees waiting for their own tattoo or from those who already received one. Each stab of the spike leaves two dots containing a mixture of palm oil, herbs, charcoal ink and in rare cases also cigarette ash and snake venom. For most of the Sak Yant about 2-3,000 strikes are needed to complete a pattern, whereas phrases from Sanskrit would take less. At close range it is comparable with observing a sewing machine riddling fabric. When complete, the monk blesses the Yantra and blows a sacred Ghata on it. Only if he does so, the tattoo is infused with magical power and only if a devotee follows and truly believes the most basic buddhist rules like the five precepts, the Sak Yant becomes sacred. 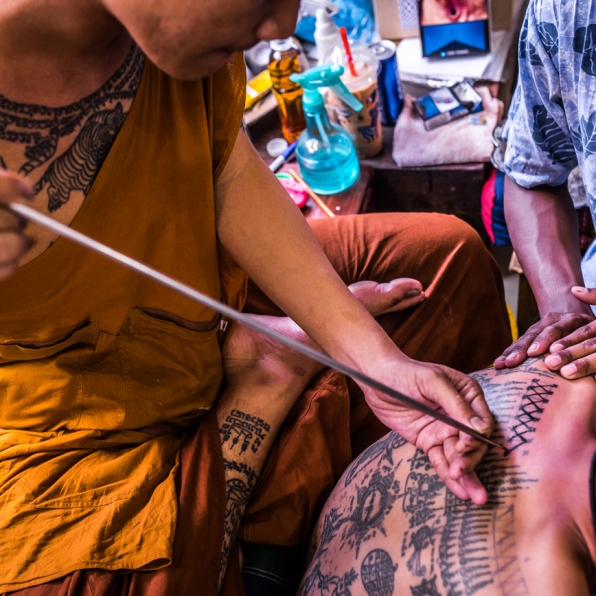 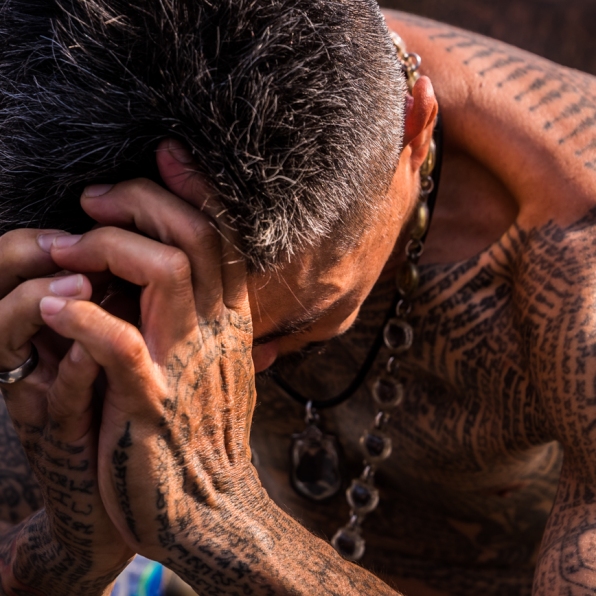 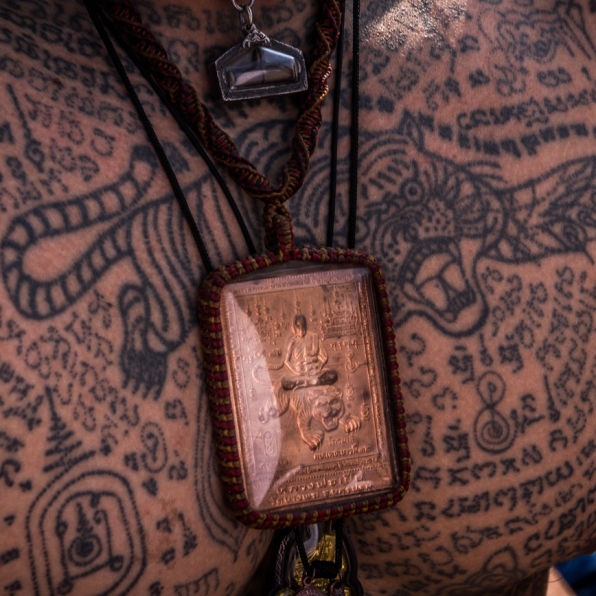 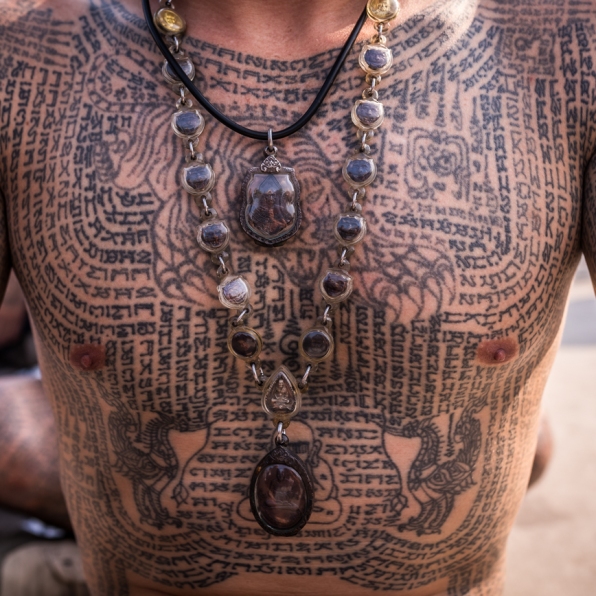 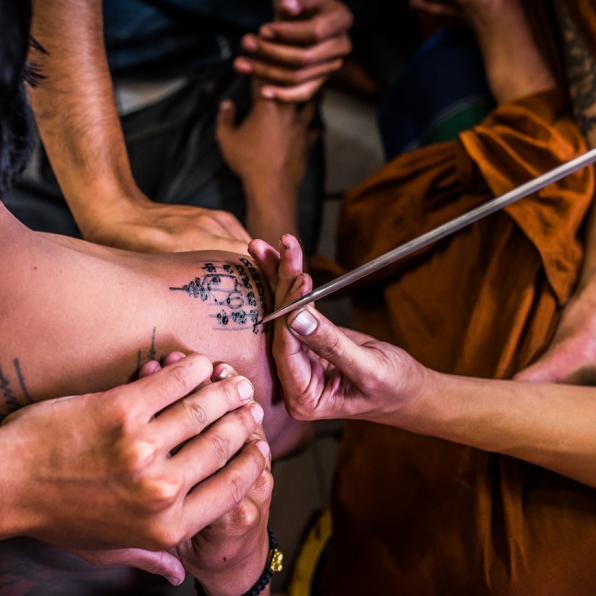 Yes, these pics are for sale! Follow the link to my webshop for prints, rights, or personal use